or make 4 interest-free payments of $39.99 AUD fortnightly with

Up ahead, isolated in the Massachusetts countryside, stands a secluded mansion. This is where the clues have led you. This is where you will finally find the answers you have been seeking. As you advance through the cold, driving rain, the dim light dancing in the ornate windows gives the appearance of a dozen sinister eyes watching your approach. The very walls are infested with evil and the great house seems to stare at you with hostility, but despite the growing fear gnawing at your soul, you press on. You must. This madness has to end, and by God, it will end tonight… even if it kills you.

Designed by Corey Konieczka, Mansions of Madness is a scenario-driven board game of occult horror and mystery for two to five players. One player takes on the role of the keeper, a malevolent force working to complete a sinister plot. All other players take on the roles of investigators who explore an eerie location in the hopes of solving a mystery before it’s too late. The keeper’s goal is to fulfill an evil scheme, using the weapons of fear, paranoia, and terrifying monsters. The investigators win or lose as a team, and must keep their wits about them to find the artifacts, weapons, and clues needed to stop the keeper’s diabolical plot. Can a handful of brave investigators uncover the truth in time or will the wicked plans of the keeper come to fruition?

Every game of Mansions of Madness creates an immersive story that, depending on the players’ decisions, can unravel in countless different and exciting ways. Included in the base game are five gripping scenarios, and each one offers a combination of plot choices to take your stories in new directions.

To begin setup, for example, the keeper secretly makes choices that will affect both the plot of the unfolding story and the gameplay objectives of both sides. Is the mysterious cult attempting to murder the investigators or is their goal far darker? Did the master of the house go insane with grief over his dead family or is a horrible otherworldly force controlling his mind? Only by following the trail and piecing these clues together will the investigators discover the true evil and successfully complete the story! 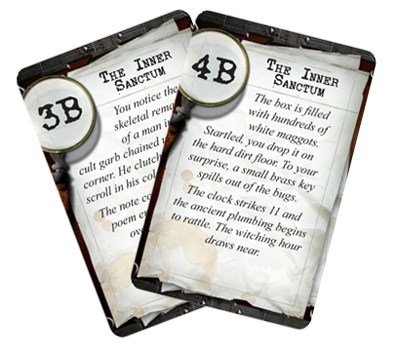 Based on the combinations of plot choices the keeper makes, clues are scattered throughout the various rooms that make up the board. Each clue is represented by a card, placed face down in the room in which it can be found and consisting of deeply thematic text leading investigators to the next clue card. Investigators must work together, finding the clues and discussing how best to proceed. Meanwhile, the keeper is ever vigilant in pursuing his own agenda, and if he completes his secret objective before the investigators discover and thwart it, then dark forces will prevail. The result is an engaging race between good and evil!

Unfortunately for the investigators, clues aren’t merely sitting out waiting to be found. Plenty of other items, both helpful and harmful, are scattered throughout the board as well. Additionally, clues are often guarded by the minions of the keeper, requiring combat, or locked behind complex puzzles, requiring a demonstration of intellect. As you explore the Mansions of Madness, stay with an ally who complements your abilities. Otherwise, you may quickly find yourself at the mercy of a difficult puzzle… or a blood-crazed cultist. But whether you’re facing a rotting zombie in the graveyard, a knife-wielding cultist in the attic, or a massive chthonian on the front porch, Mansions of Madness’ components will draw you in the terrifying action. The beautifully rendered modular map tiles show every intricate feature of the rooms you’ll search, and the monster figures represent the otherworldly forces of evil in horrific detail. The bases for each monster figure also have slots into which you can insert that monster’s token, displaying only the pertinent statistics. These components (a total of 24 monster figures), along with the eight included investigator figures, over 300 cards, over 200 tokens and markers, and nearly 70 puzzle tiles, will immerse you in a sanity-bending story of terrifying mystery.

Horrific monsters and spectral presences lurk in manors, crypts, schools, monasteries, and derelict buildings near Arkham, Massachusetts. Some spin dark conspiracies while others wait for hapless victims to devour or drive insane. It’s up to a handful of brave investigators to explore these cursed places and uncover the truth about the living nightmares within. Do you dare enter the Mansions of Madness?